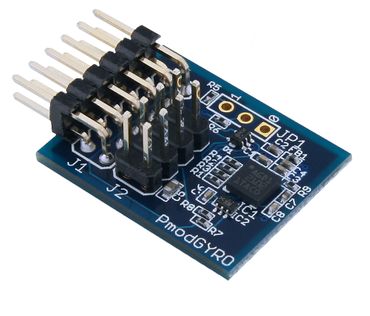 Flexible peripheral modules for all your designs

Pmod™ devices are Digilent’s line of small I/O interface boards that offer an ideal way to extend the capabilities of programmable logic and embedded control boards. They allow sensitive signal conditioning circuits and high-power drive circuits to be placed where they are most effective - near sensors and actuators.

Pmod modules communicate with system boards using 6, 8, or 12-pin connectors that can carry multiple digital control signals, including SPI and other serial protocols. Pmod modules allow for more effective designs by routing analog signals and power supplies only where they are needed, and away from digital controller boards.

The Pmod GYRO is a peripheral module featuring the STMicroelectronics L3G4200D MEMS motion sensor. The L3G4200D provides a three-axis digital output gyroscope with built in temperature sensor. The Pmod GYRO uses a standard 12-pin connection and communicates via SPI or I2C, defaulting to I2C communication.

Other Digilent products are available on request.